We remain STRONGLY OPPOSED to this very ONEROUS zoning bill, which is completely unfriendly to County residents.  Particularly at this time when residents and most elected officials of the County Government are focused on beating COVID-19.

The press release contains numerous assertions that are NOT supported by data, and it misleadingly scrambles analogies between WIRED and WIRELESS networks. A full fact-check on the press release will be ready later this week.

As lead sponsor again, Mr. Riemer, with this proposed legislation, makes his fourth attempt  over the past three years, to make it faster, cheaper, and easier for Big Wireless to install bulky, high-powered wireless antenna transmitters and related equipment as close as 30 feet, and sometimes closer, to single-family zoned homes.

ZTA 19-07 is co-sponsored by Council Vice-President Gabe Albornoz (At-Large) and Councilmember Craig Rice (District 2). Both co-sponsors are quoted in the press release.  However, neither Mr. Albornoz nor Mr. Rice serves on the Planning, Housing & Economic Development (PHED) Committee which has jurisdiction over wireless zoning issues.

Why Riemer Pulled the Bill in 2020

Mr. Riemer, as Chair of the County Council’s PHED Committee, summarily pulled a scheduled vote on the proposed bill from the Committee agenda on February 1st of last year. He was apparently unable to enlist the support of PHED Committee members — Councilmembers Andrew Friedson (D – District 1) and  Will Jawando (D/At-Large) — in order to move the bill out of the committee. Committee approval is necessary to bring the bill to full Council for consideration and final vote.

The Council conducted a hearing last year where two dozen County residents testified to register STRONG disapproval of the ZTA.  Of the scant number who spoke in favor of the ZTA, most of them had ties to the wireless industry (lobbyists and outside lawyers).

County Executive Marc Elrich submitted testimony OPPOSED to ZTA 19-07 at the hearing in January 2020.  Mr. Elrich urged the Council to pause, so that comprehensive zoning legislation and administrative regulations could be developed to address the wireless issues. And he conveyed his intent for staff and agencies to develop the legislation and regulations by working with residents and technical experts, not just industry lobbyists.

It was reported last year that neither Mr. Friedson, nor Mr. Jawando would support ZTA 19-07 while Montgomery County was actively engaged in two lawsuits against the FCC. (Those lawsuits are very briefly described below.) So, rather than be defeated in a formal (and public) Committee vote, Mr. Riemer – as Chair – simply removed the item from consideration the day before scheduled vote last year and placed bill in suspension.  (More explanation about Mr. Riemer’s sidestep on ZTA 19-07 can be found in this Bethesda Beat article…)

However, if Mr. Reimer can swing just one PHED member to support ZTA 19-07 this year – a full and final Council vote could come as soon as early March 2021.

There is unlikely to be another hearing allowing public testimony. So we must stop ZTA 19-07 in Committee – with a formal vote.

We urge each of you to email both Mr. Friedson and Mr. Jawando TODAY (along with the 4 other Councilmembers who have NOT sponsored this bill). Tell Councilmembers to prioritize the concerns of County residents and neighborhoods ahead of the interests of Big Wireless.

Find Council Contact Information at the bottom of this page

More details will be coming soon.

Montgomery County’s Lawsuits Against the FCC

The County remains engaged in two very important pending lawsuits against the FCC. Decisions are expected sometime in the second half of this year.  These lawsuits are:

It is no small irony, that Mr. Reimer and Mr. Rice, who were both on the Council in November 2018 voted IN FAVOR of the RF Emissions litigation at the urging of outgoing County Executive Ike Leggett. And, yet both would subsequently introduce and support ZTA 19-07 which seeks to expedite 5G rollout with NO new RF safety standards!

On November 27, 2019 the FCC very suddenly decided to end a long running “Notice of Inquiry” that had sought public input on whether FCC should amend RF Emissions standards. (It was the failure of the FCC to conclude this very inquiry that led to Montgomery County’s second lawsuit described above.) The FCC found in Order 19-226 that – despite extensive public comments and ample scientific data to the contrary:

As a important footnote, the Council held a “Executive Session” – out of public view – on January 28, 2020 to meet with legal counsel (Keller & Heckman) representing County regarding lawsuit on RF emissions. Regrettably, as is the Council’s custom, the Executive Session meeting minutes provide no summary of the actual discussion nor the conclusions reached by Council – except that “guidance was provided to the County Executive.”  As such, the Council has made no public announcements regarding the January 28, 2020 closed Council session where “FCC litigation” was reportedly discussed, nor provided any interim updates to residents of Montgomery County  on progress of this very important litigation.

But from all appearances, the County Council apparently declined to file as intervenor (or even file amicus brief) to support the very  important  Petition for Reconsideration as filed by the Environmental Health Trust seeking to specifically overturn Order 19-226.

The EHT petition asserts that the FCC (in Order 19-226) improperly terminated a Notice of Inquiry begun in 2013 to update RF Emissions standards and by doing so unlawfully disregarded a large body of evidence in violation of the Administrative Procedures Act. (APA)

Thus, through action/or inaction in secret Executive Session, the Council may have effectively closed off the only possible backup alternative if the 9th Circuit rejects the County’s own RF Emissions lawsuit for lack of standing. (e.g. the FCC did what the County’s lawsuit asked and ended the Notice of Inquiry.) In other words, there is real possibility that County’s second lawsuit becomes moot, even if outcome of updated RF regulations were not issued as County sought. 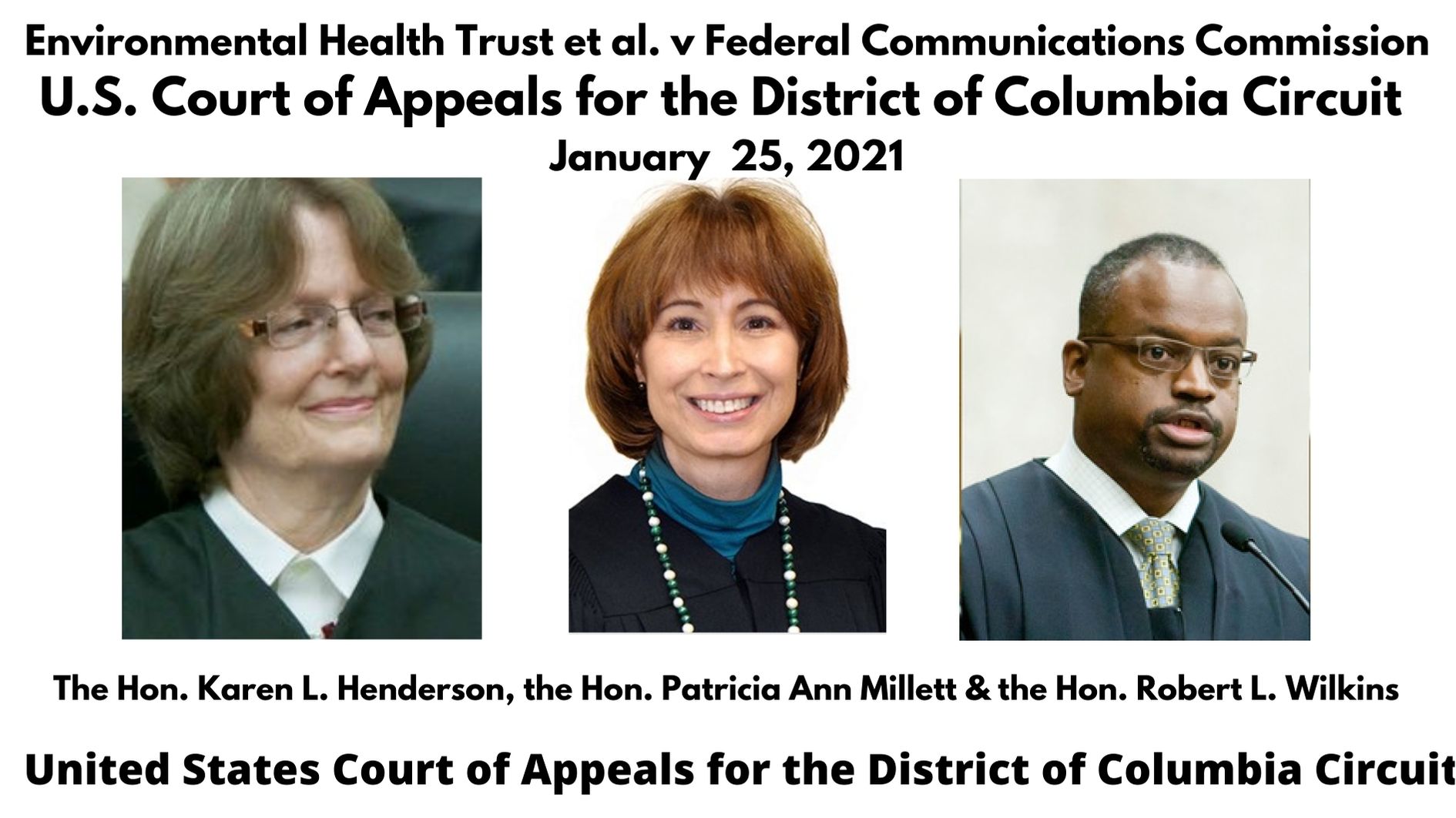 Judge Wilkins to the FCC: “I Am Inclined to Rule Against You” Video, Court Transcript and Press Conference Replay - Environmental Health Trust
We had our day in court. The truth was on our side and the judges asked excellent questions indicating that they read the scientific and policy evidence EHT submitted to the FCC over the last decade now used as evidence in the case. 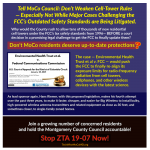 Tell MoCo Council: Don’t Weaken Cell-Tower Rules — Especially Not While Major Cases Challenging the FCC’s Outdated Safety Standards are Being Litigated
Why would the County rush to allow tens of thousands of new residential cell towers under the FCC’s lax safety standards from 1996— BEFORE a court decision in a promising legal challenge to get the FCC to finally update them? Don’t MoCo residents deserve up-to-date protections? The case — Environmental Health Trust et al v.Continue reading →
Posted in Action Alert, Legislation and tagged Democracy at Stake, Montgomery County Maryland, Take Action, We Do Not Consent, ZTA19-07.